Some 180 guests lined up to hear the diverse selection of speakers at the Regen in Practice event last Friday.

SOIL health and keeping both productivity and profitability high were key points of focus at the Regen in Practice event held near Denmark last Friday.

"It's so good to have such a crowd turn up to talk about these really critical issues," Ms MacTiernan said.

"I am constantly copping it from the other side of parliament because they reckon you shouldn't be talking about these things, that this is all about growing biodynamic quinoa, when actually no, this is mainstream stuff," Ms MacTiernan said.

"At the heart of this is a desire to understand what is happening in the world.

"To understand that we will have a massive impact from climate change and that's going to impact us in different ways."

"What we have tried to achieve today hopefully converts farmers that have historically used conventional means, to look and understand that using regenerative practices in their farming enterprises will ultimately improve the environment, but more importantly still sustain productivity and yield."

Mr Frost, who has been farming since 1979 and regenerative farming since 1996, shared the importance of a balanced approach and to not look at farming as an isolated practice.

"The big thing about regen is that it is outcome based, not input, it's the results you get out, which is what determines regen."

The outcomes he refers to include soil health, but also must provide sustainable profits, reiterating how important it is that the balance produces a profitable result that can afford farm reinvestment.

"Taking a holistic approach also means looking at how your farm may affect the environment it's a part of," he said.

"We need to consider that it's not just about your own farm, we really don't have the right to put so much nitrogen or phosphorus into the system, which could damage, for example, the Wilson Inlet.

"The real issue with regen is that we, as farmers, must manage that environment, we need to be helping, not negatively contributing to it, and it's a balanced approach." 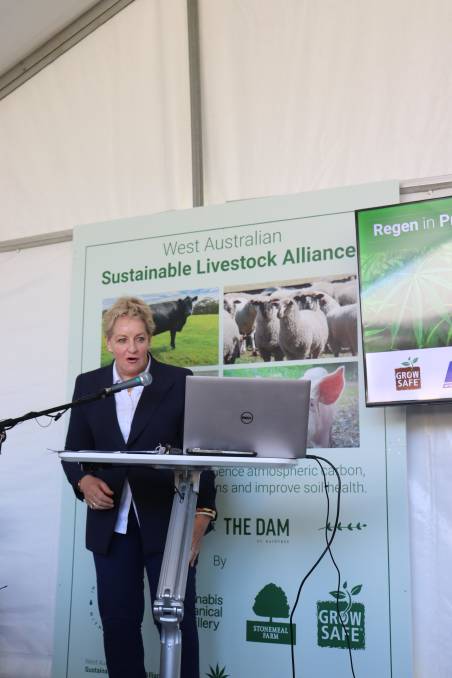 Agriculture, Food and Regional Development Minister Alannah MacTiernan opened the event, emphasising the importance of these events and discussions.

Two main areas that have been critical in getting the rhizosphere functioning optimally are biology - including soil microbes, insects, worms and diversity in plants - and remineralisation.

"They have now identified more than 60 minerals which are critical for soil health, plant health, microbial health and our health," Mr Frost said.

"I haven't used a lick block on our farm for 20-odd years, I don't have to inject magnesium into cows."

Mr Frost's message was clear and in alignment with many of the other speakers: mineralisation and microbes are key.

Mineralisation improves microbial diversity, having a direct impact on soil health and production yields of pastures and crops.

"Biological farming does not preclude the use of chemicals, it's just understanding there is an effect," Mr Frost said.

The proof is in the soils, with the Stonemeal Farm ewes still productive at eight or nine years of age and its hay yielding 18 tonnes per hectare with only the use of five to seven units of nitrogen.

Farm tours were also included where guests were taken through the hemp, pasture and truffle production at Raintree Farm where The Dam is situated, providing an opportunity to ask questions, demonstrating how regenerative farming can work in a practical and hands-on way.

The event concluded with the signing of a newly formed memorandum of co-operation, the Western Australian Sustainable Livestock Alliance, that will provide solutions through regenerative farming to sequester atmospheric carbon, reduce livestock emissions and improve soil health.