The increased catalogue of 391 springing first cross heifers was widely regarded as the best seen at the fixture, with the vendors' meticulous preparation of their PTIC bucket-reared, vendor guaranteed heifers not going unnoticed.

The increased catalogue of 391 springing first cross heifers was widely regarded as the best seen at the fixture, with the vendors' meticulous preparation of their PTIC bucket-reared, vendor guaranteed heifers not going unnoticed.

The dominant numbers of Angus-Friesian heifers were joined by a selection of Montbeliarde, Hereford and Murray Grey crosses, AI and naturally mated to Angus and Limousin bulls to calve in the summer and early autumn.

The top line-up of heifers attracted a register of 36 prospective buyers and at completion of selling, auctioneer Chris Waddingham and the Nutrien Livestock South West selling team had notched up a complete clearance of the catalogue to average $3033 and values topping at $3500 on two occasions.

While the sale may have tempered on some expectations, particularly at the top end, it was a very consistent sale from start to finish with an elevated average by $317 on increased numbers from last year.

Last year there was a total clearance of 258 PTIC Angus-Friesian heifers at an average of $2716 with values reaching $3100.

Black Dog Ride charity heifer Clementine 10 again took the honour of opening the sale with all funds from the sale donated to the Black Dog Ride initiative that raises awareness and funds for mental health and suicide prevention. Nutrien Livestock, Manjimup representative Brett Chatley (left), representing the Ryan family, Goodonga Farms, Manjimup, and buyer Ross Thornton, Thornton Farms, Denmark, with one of the $3300 equal top-priced pens of Goodonga Farms heifers AI joined to a Black Limousin bull and due to calve from February 18, 2022, both purchased by Thornton Farms.

The quiet halter broken, eye-catching two-year-old heifer is PTIC to Limousin bull Merryvale Quamby and is due to calve from February 17.

All sale proceeds of Clementine 10 will be donated to the Black Dog Ride with Nutrien Livestock waiving all selling costs and commissions.

For the fourth year in row, the Black Dog Ride charity heifer was purchased by passionate supporters of the cause Kim and Kerrie Dunnet, OM Dunnet & Co, Nannup, for $3100.

Although the Dunnets were unable to attend the sale this year, Nutrien Livestock, Margaret River/Busselton agent Jock Embry happily purchased the heifer on their behalf.

The sale's $3500 top prices were recorded from the outset.

The Haddons kicked the sale off with three pens of six roomy heifers which were all AI to an Angus bull and due to calve from January 30.

AG, AM & BJ Norton, Pinjarra, collected the next two pens of Haddon heifers, paying $3500 and the $3400 equal second top price.

RA Adams & Co, Ravenswood, operated at the top of the market for two pens of six Haddon heifers, paying the second top price of $3400 twice with the first pen a natural joining due to calve from March 10 to April 20 and the others AI and due from January 30.

The Ryan family, Goodonga Farms, Manjimup, offered 39 Angus-Friesian heifers at the sale and achieved the $3300 third top price on two occasions for pens of five and six heifers respectively that were AI joined to a Black Limousin bull and due to calve from February 18. 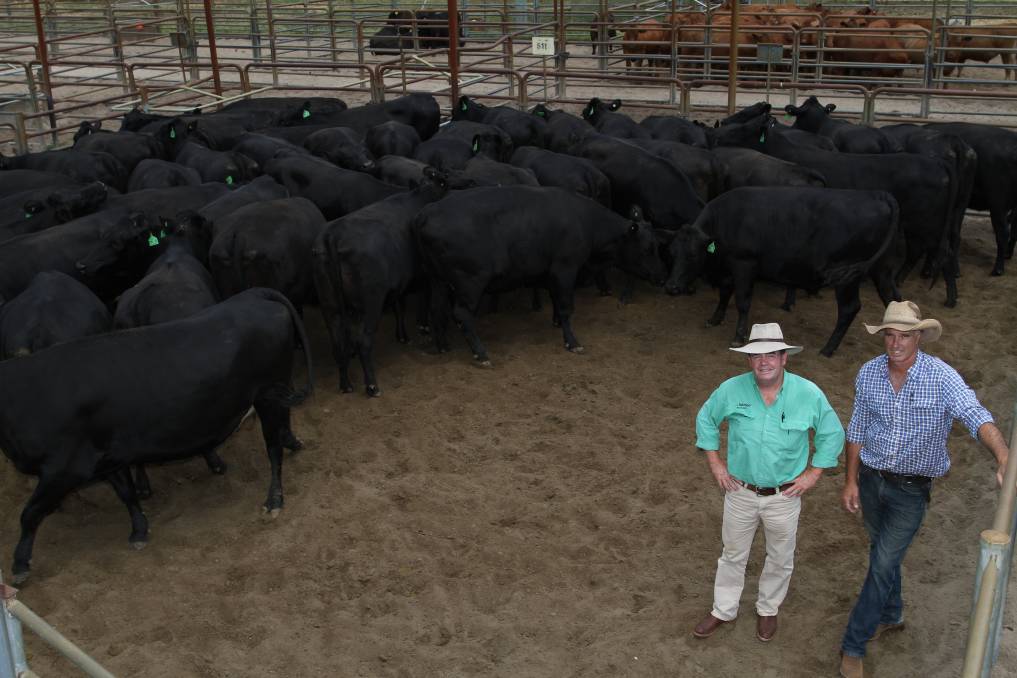 Volume buyer Jamie Abbs (left), Nutrien Livestock, Boyup Brook and Nathan Mead, Balingup, with the 56 Angus-Friesian heifers they selected for a Balingup order costing from $2900 to $3200.

Mr Thornton said the heifers are lovely and quiet and appreciated the follow up service from the Ryan family.

The Noakes family's, Chapman Brook Pty Ltd, Warner Glen, draft of 47 predominantly Angus-Friesian also sold to $3300 with another Denmark buyer G Boccuzzi & Co, collecting a pen of six heifers due to calve to Diamond Tree and Lawsons Angus bulls from January 30 to April 3.

The Boccuzzis added another four Haddon heifers to their account for $3000.

Nutrien Livestock, Waroona agent Richard Pollock snapped up all five pens of Angus-Friesian heifers that were either AI mated to a Balamara Limousin bull due to calve from January 14 to February 4 or naturally joined to Sheron Farm Angus bulls to calve from February 11 to April 8.

Mr Pollock was one of the sale's volume buyers, finishing with 11 pens of heifers on his account.

Jacques Martinson, Elders, Busselton, armed with two orders purchased Candyup Farms' nine Hereford-Angus-Friesian heifers for $3000 each, five of which were AI to an Angus bull and due to calve from February 11 to March 4 and the balance to Angus bulls, while he paid $3100 for eight Murray Grey-Angus-Friesian heifers AI to a Limousin bull and the balance to Angus bulls with the same calving dates as previously mentioned.

The MacDonald family, KM, EJ & LK MacDonald, Cookernup, offered 36 Angus-Friesian heifers due to calve from February 2 to April 2 to a Willendaise Limousin bull with the draft's $3100 top-priced pen of seven heifers knocked down to Nutrien Livestock, Brunswick/Harvey agent Errol Gardiner.

The Kitchen family's, Kitchen Farms, Boyanup, sale team of 30 Angus-Friesian heifers topped at $3200 with GR Lee, Nannup, paying top price for six heifers AI-mated and backed up to a Unison Limousin bull and due to calve from February 2 to April 4.

One of Mr Abbs' accounts totalled 56 heifers for a Balingup grazier which cost to $3200 for Haddon heifers and also included the $3100 top price from the draft of 20 Angus-Friesian heifers offered by Clews Asset Management Pty Ltd, Boyanup, which were AI joined to an Angus bull and due to calve from February 20.

There were plenty of buyers who collected two pens of heifers at the sale but the other buyer to to secure three pens was Brimic Farms, Collie, who outlaid from $2900 to $3000 for three consecutive pens of heifers from the Haddon draft. NUTRIEN Livestock sale auctioneer and Capel agent Chris Waddingham said it was a solid result which represented good value for vendors and buyers.

"The majority of the females sold from $2800 to $3200 and we thought it was a solid result without being spectacular and possibly reflected the returns for slaughter grade calves in the current WA processing market," Mr Waddingham said.

"Calves from first cross females have reduced in numbers over the years and there has been some pressure on price this year and I think buyers reflected this with their purchases."