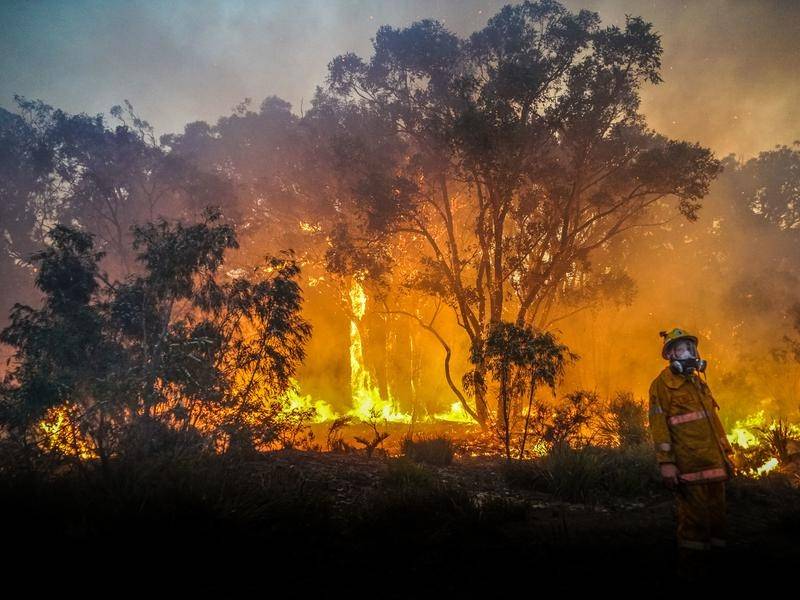 Authorities have warned an ember attack is likely from a bushfire in the Perth hills.

Authorities have warned an ember attack is likely from a fire in the Perth hills, where firefighters have battled to save homes in Warrigal Estate on Monday.

Burning embers are likely to be blown around homes under threat from a bushfire raging in searing temperatures in Western Australia.

Authorities have warned an ember attack is likely from a fire in the Perth hills, where firefighters have battled to save homes in Warrigal Estate on Monday.

"Homes in Warrigal Estate, Forge Drive and Anvil Way may be under threat by embers and you should leave if it is safe to do so," the Department of Fire and Emergency Services said in its latest warning about midday.

The threat remains despite the fire being controlled and contained.

"Due to extreme weather conditions and fire lines being tested people will need to remain vigilant and watch for potential threat from embers," authorities have warned.

An evacuation centre is open at Mundaring Arena on Mundaring Weir Road in Mundaring.

There are 120 properties in Wooroloo, Gidgegannup and Chidlow without power. Some properties are without water.

There are 120 firefighters monitoring and mopping up the blaze, which was reported at 3.41pm on Boxing Day and burnt 164.5 hectares.

An emergency warning was also in place for a fierce bushfire threatening homes in the Augusta-Margaret River Shire, about 300 kilometres south of Perth.

A community meeting will be held at the evacuation centre at the Margaret River Recreation Centre at 3pm.

Winds are strengthening in the area.

The warning applies for areas bounded by Osmington Road to the south, Bell and Stuart roads to the north, Jindalong-Treeton Road to the west and Great Northern Road in the eastern parts of Treeton and Osmington.

People have been urged to leave Treeton and Osmington if the way is clear, or to shelter in their homes if they cannot leave.

The warning was increased from the watch-and-act level on Sunday afternoon due to weather conditions and the fire growing on heavy fuel loads.

The warnings came as the state endures a spell of hot weather, with Perth recording maximum temperatures of 42C and 43C on Christmas Day and Boxing Day, and 40C forecast for Monday.