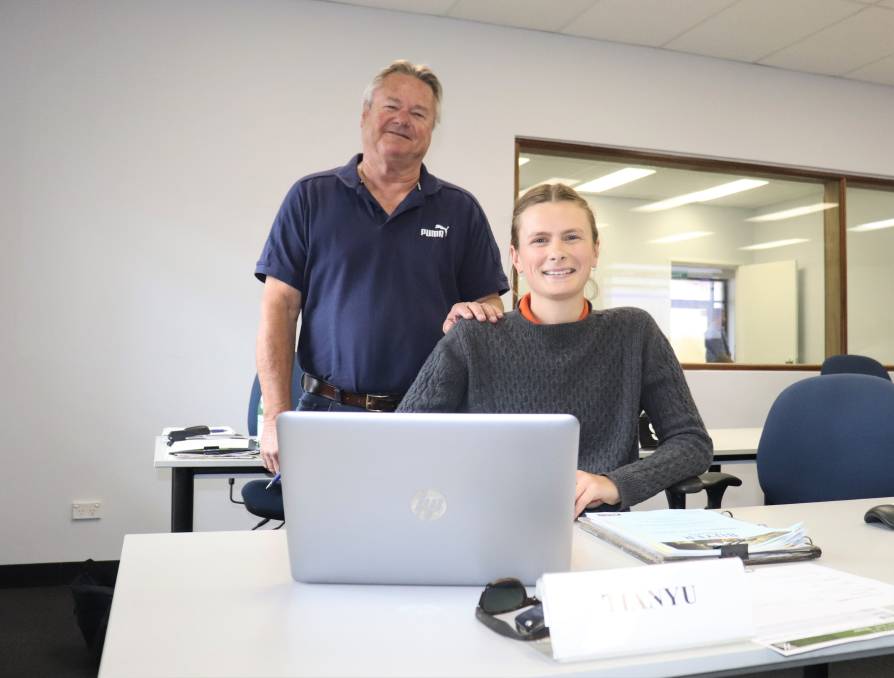 Veteran wool buyer Dave Cox, 71, has completed the Tianyu wool-buying baton change with protégé Zena Wareham, 23. Mr Cox retired after 55 years in the wool industry - 54 of them as a buyer at the end of the final Western Wool Centre live auction for 2021.

As a sole operator representative at the WWC, he was one of a declining breed who are gradually being replaced by contract buyers.

A WOOL-buying baton of note was handed over cleanly at the final sale of the year at the Western Wool Centre (WWC).

After 55 years in the wool industry, 22 of them with Tianyu Wool Australia where he is the company's longest serving buyer, having worked for Tianyu in Sydney and Adelaide, before returning to WA, Mr Cox has retired.

As a sole operator representative at the WWC, he was one of a declining breed who are gradually being replaced by contract buyers.

"As sole operators we call ourselves Leo Sayers - we're a one-man band," Mr Cox quipped at his last wool auction overseeing Ms Wareham who has been learning from him for the past nine months and has an important function to maintain.

Widely respected by fellow buyers as well as brokers, Mr Cox has been considered something of a market bellwether at the WWC, renowned for jumping in and buying in a falling market - usually just before it bottoms out and starts to rise again.

"At school I didn't know what I was going to do (for a job) so I went and did a wool classing course," he said.

"I started with Wesfarmers in their bulk class section at South Fremantle, I used to ride my bike to work.

"My first job was sewing up jute wool packs and branding the bales with what was in them after they came out of bulk class.

"Then a company called John Sanderson & Co offered me a job in 1967 to be a wool buyer and that sounded pretty good so I took it."

John Sanderson & Co were wool buyers and shipping agents, with the company well over 100 years old and steeped in traditions going back to when WA wool was shipped to London to be sold, when Mr Cox joined.

Wool buyer was a prized and respected position in the industry.

"A short while later I got a company car - an orange Torana - and I thought 'how good is this?'.

"I transferred to Adelaide from 1974-79, then came back here (Perth) with Sandersons to be their manager here for WA.

"Then they got taken over by Elders so I went with the flow."

Mr Cox moved to Sydney in 1989, but unfortunately this coincided with the collapse of the giant Elders IXL conglomerate created by Melbourne businessman John Elliott.

Elliott had bought Tasmanian jam maker Henry Jones IXL in 1971 and gained control of Elder Smith Goldsborough Mort in 1981 through a complex reverse merger at a time when that company was fighting off a hostile takeover by WA share raider Robert Holmes à Court.

Elliott was replaced as chief executive officer in 1990, assets were sold off to meet debt repayments and the subsequent restructure saw agribusiness interests floated as a public company, Elders Ltd.

Mr Cox returned to Perth and bought wool for several companies before ending up at Dalgety, but by then it was a familiar situation of working for a company struggling financially - Dalgety's pastoral interests were sold to Wesfarmers in 1993 - so he took a chance with a new company.

"A guy in Melbourne called Ian Williams had started up a company that operated as Ian Williams Wool and he was buying for Tianyu and then eventually Tianyu decided it wanted to use its own name, so the business became Tianyu Wool Australia," Mr Cox said.

As a wool buyer Mr Cox has seen much of the world, travelling to visit client mills.

"I thought it was pretty good - the only trouble was in the early days I got to go to India and Pakistan and the bosses got to go to Europe," he said.

"But as I became more senior I started to get Europe and other places - I visited mills in Mauritius - and later on with Tianyu, of course China.

"I think we (wool buyers) were the original FIFO (fly-in, fly-out) workers, we did that much travel.

"In the early days I also used to do a fair few of the Eastern States' sales, I'd always do Adelaide and then I'd go on to Portland, Albury or Launceston - you were always on a plane."

Once COVID is no longer a threat, travel is something Mr Cox would like to return to in retirement.

"I'd like to see things for myself instead of for the company and not have to write a report when I get home," he said.

He also expects his role as Peel Thunder Past Players' Association president to absorb his time.

"I played nearly 400 games with a club called Melville in the amateurs," he said of his football interest.

"I was going to go to East Fremantle (football Club) but my boss at the time said 'do you want to be a footballer or a wool buyer?'

"I looked at it and decided I would probably be a wool buyer longer than I'd be a footballer."

He started in the industry quite literally bidding in increments of farthings for a pound of wool and receiving and sending coded telegrams so other buyers could not read what wools he was instructed to buy and what he was paying for them.

"We (buyers) had code books - that was my first job of the day to decipher the telegram telling us what to buy," Mr Cox recalled.

"Everyone had a different code and you wrote the prices in code when you sent the telegram back - I still know the code and use it sometimes for my own notes."

On his last day Mr Cox kept an eye on Melbourne and Sydney wool markets by internet while trading at the WWC and recorded his purchases on a laptop computer, informing head office instantly and no need for code.

"It's been a great industry - it gets in your blood," he said.

"The best thing about it is it is resilient - it's been knocked on its knees so many times, but it keeps coming back."

He also has no doubts Ms Wareham will carry on his tradition of buying in a falling market.

"She's a terrific young lady, she will make her own footprint in the sand, she doesn't need to emulate me because there won't be another me," Mr Cox said.