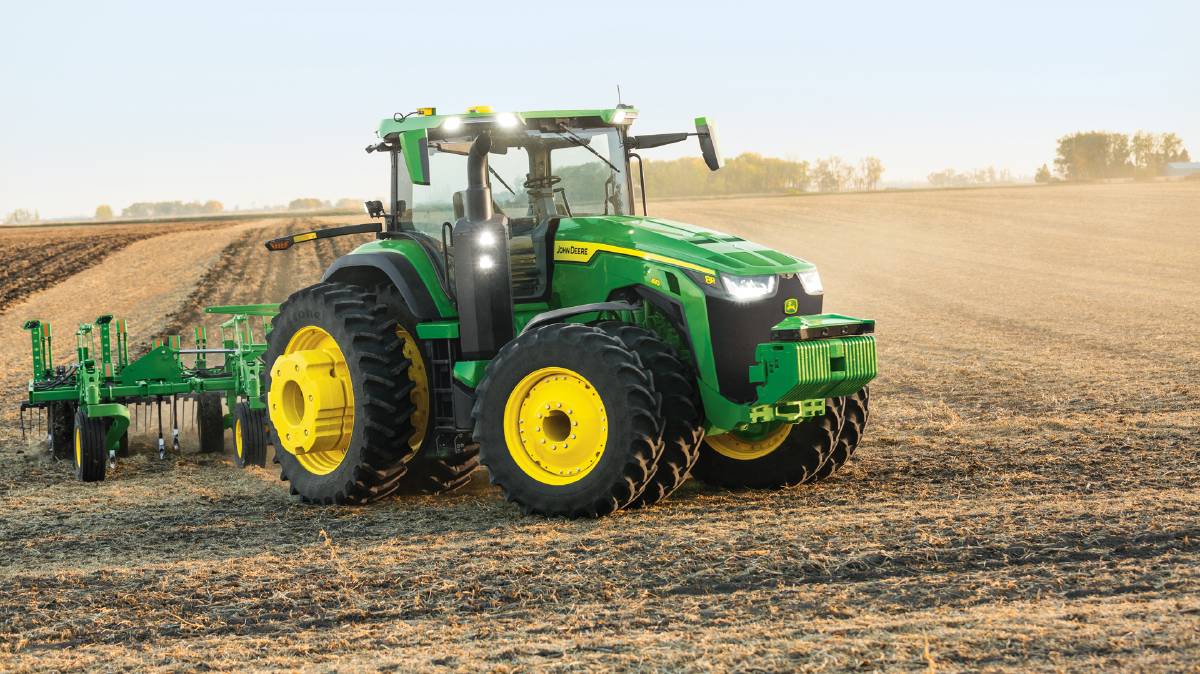 John Deere's production-ready autonomous 8R 410 tractor pulling a chisel plough making a turn at the end of a pass without anyone in the cab during trials.

Claimed as a world-first, the fully-autonomous John Deere 8 Series tractor was unveiled on the opening day of the annual Consumer Electronics Show (CES) in Las Vegas, promoted as the 'most influential technology event in the world', with 2200 exhibitors this year.

Claimed as a world-first, the fully-autonomous John Deere 8 Series tractor was unveiled on the opening day of the annual Consumer Electronics Show (CES) in Las Vegas, promoted as the 'most influential technology event in the world', with 2200 exhibitors this year.

The autonomous tractor, which combines cameras and StarFire GPS guidance system with artificial intelligence (AI), machine learning and other new technologies, is scheduled to go into limited production later this year.

Future production volumes are projected to grow in line with demand as farmers warm to a technology that in theory will enable them to double their productivity.

As they drive their existing tractor they can monitor on their mobile phone or tablet what an autonomous tractor working either alongside or somewhere else on the farm, is doing.

The actual 306 kilowatt 8R 410 large row tractor fitted with the autonomous technology was too big for the Las Vegas convention centre lift to get it on stage for the unveiling, but it was on display over the three days of CES at the John Deere stand in the central plaza, where visitors could climb all over it.

A procession of John Deere executives and technology specialists, from chief technology officer Jahmy Hindman down the corporate ladder, presented overviews of the technology and the rationale behind its development and their observations on the autonomous 8R tractor's potential impact on future farming and food production.

At this stage of development, the autonomous 8R is set up for tillage and a video of it pulling a TruSet-enabled chisel plough on a fourth-generation Minnesota farmer and John Deere customer's 800 hectare corn and soybeans cropping property was shown at the unveiling.

Much of the autonomous technology already existed in John Deere operator assist applications, but the final step in allowing an operator to climb out of the cab while the tractor continued working in the paddock was to provide adequate safety protections, John Deere executives indicated.

The key to safety in the 8R tractor's autonomous operation is a camera and image interpretation computer package on board.

Six pairs of stereo cameras mounted front, rear and on the sides provide 360 degree obstacle detection, with the cameras focussed to detect potential obstacles in the paddock up to 50 metres away, people attending the launch were told.

Stereo cameras operate like a human eye and produce one image, but enable the tractor's computer to calculate distance.

The computer system assesses each pixel of an image in 100 milliseconds and determines if the machine continues to move or stops, depending on whether an obstacle or something it was not programmed to expect, is detected. 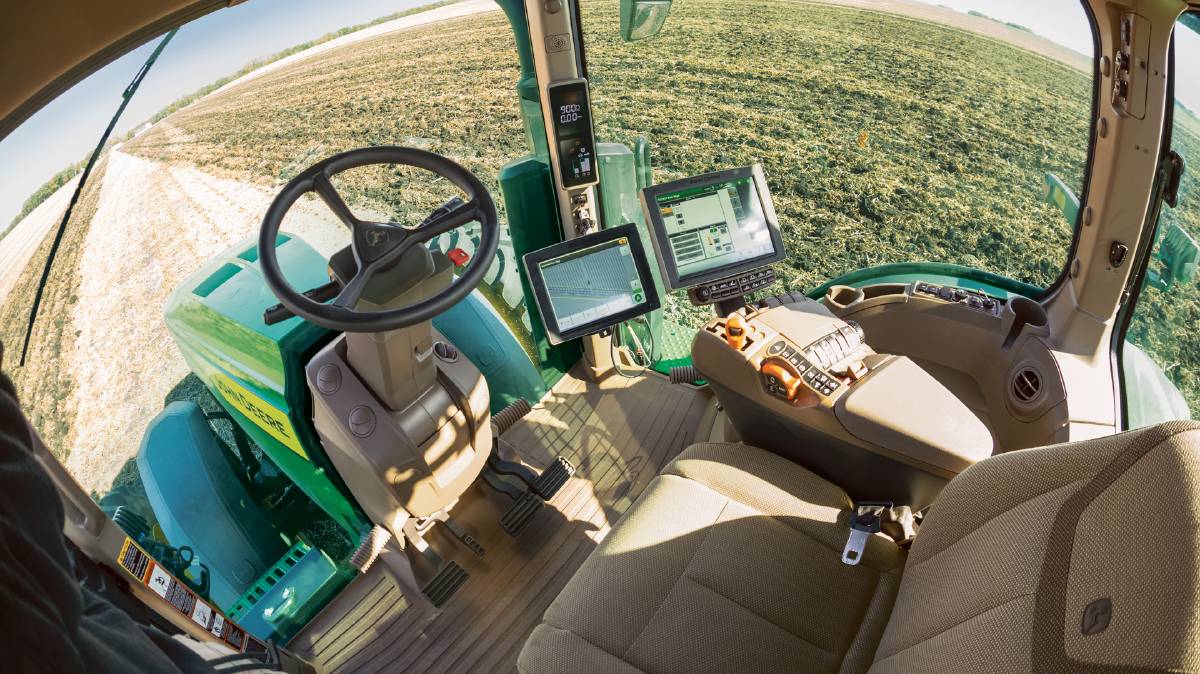 Farmers can remotely check on the autonomous tractor's progress and performance via the John Deere Operations Centre app on their phone.

The 8R's autonomous technology was tested over the past three years, with 50 million images captured during in-field testing used as a base data set.

If the obstacle detection system brings the tractor to a halt, a notification is sent to the farmer's mobile phone.

They can then check remotely what the tractor's cameras see, make a decision on what they want it to do and send it a new instruction via the John Deere Operations Centre phone app.

Farmers operating autonomous tractors remotely will have access to live video, still images, live data and metrics on their phones and can remotely monitor the performance of the tractor and, at this stage, tillage implements and remotely alter parameters using the John Deere Operations Centre app to optimise performance if needed.

With each pass, the live data collected by the autonomous tractor will help create and update a digital footprint of the paddock it is working in and, over time, a record of decisions made in relation to a crop every year.

The chisel plough set up behind the autonomous 8R had small mirrors in a line across the front of the shanks above the points.

The mirrors reflected back as a straight line for the cameras on the back of the tractor cab.

If a point hit a rock and the angle of attack was altered, the reflection changes and a farmer checking remotely could pick up from the rear camera view if one or more points had been knocked because the mirror reflections would no longer be in line.

Checking in-cab displays remotely also enabled an operator to reassure themselves the points had maintained a set depth.

John Deere claims its trials have shown the autonomous 8R tractor can prepare more than 131ha of seed bed in 24 hours.

It can operate 24 hours a day for consecutive days at critical season peaks, with stoppages only needed every eight to 10 hours to refuel, John Deere executives at CES claimed.

Farmers need only drive the tractor to the paddock, swipe their mobile phone to start it, the tractor will beep to acknowledge the instruction, then it will start work on the pre-programmed task, executives explained.

The autonomous tractor continuously checked its position relative to a geofence, a digital map of the area it is "authorised" to operate in and the advanced technology allows it to operate to a positioning accuracy of within 2.5 centimetres, Mr Hindman said at the launch. 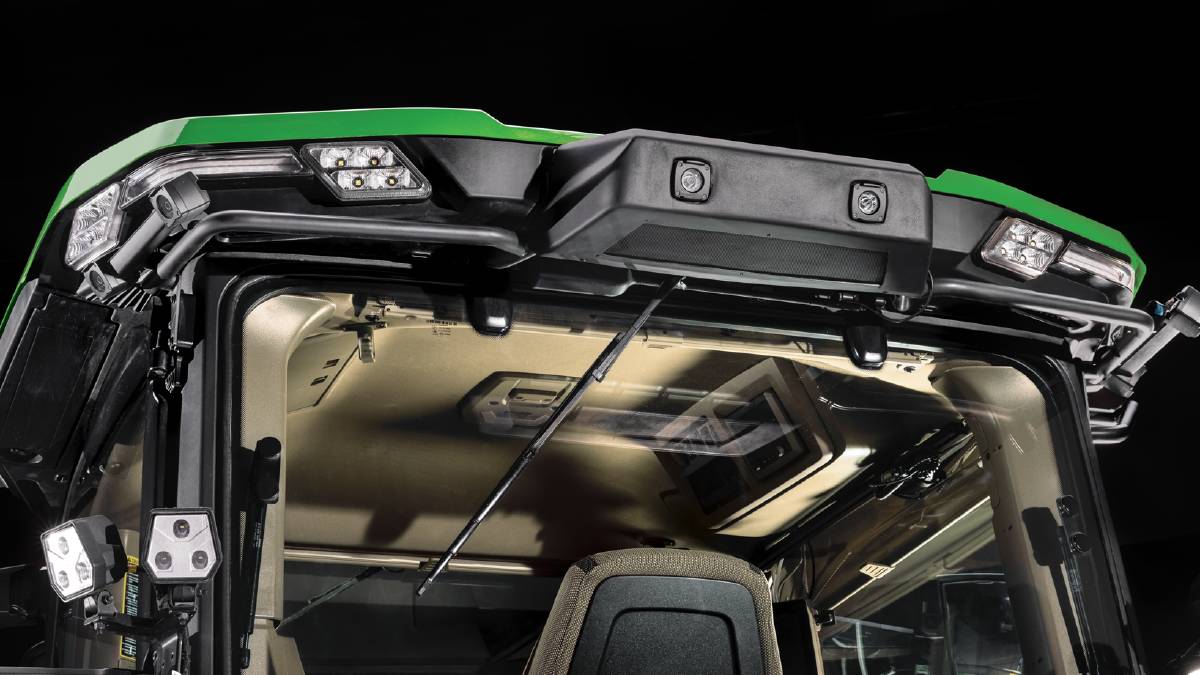 Six pairs of stereo cameras provide 360 degree obstacle detection capability. If it detects something that its computer system says should not be there, the tractor stops automatically and sends a notification to the farmer's phone.

"If you visit a farm you will see as much technology in the field as you do in Silicon Valley - from robotics and sensors, to AI and Big Data, the modern farm is a high-tech operation," he said in the build up to the unveiling.

"All of our technology serves a single purpose that affects every one of us.

"The world's population is expected to grow from about eight billion people to about 10b people by 2050 and that population growth increases global food demand by 60pc.

"They have to work through the variables that are inherent in farming, such as changing weather conditions and climate, variations in soil quality and the presence of weeds and pests, all of which have consequential impacts on a farmer's ability to produce food.

"In addition, farmers are dealing with the issue of finding the people to do the work.

"Depending on the crop they are growing, it can take seven to 15 passes through a field to produce a healthy and abundant crop.

"To get that done efficiently and in a timely manner, many farmers rely on hired machinery operators and, without fail, finding good, dependable labour is always top of the list of pinpoints on the farms that I visit.

"(So) the future of agriculture starts now."

John Deere production and precision ag business vice-president Deanna Kovar was equally enthused about the autonomous 8R and its expected impact on agriculture. 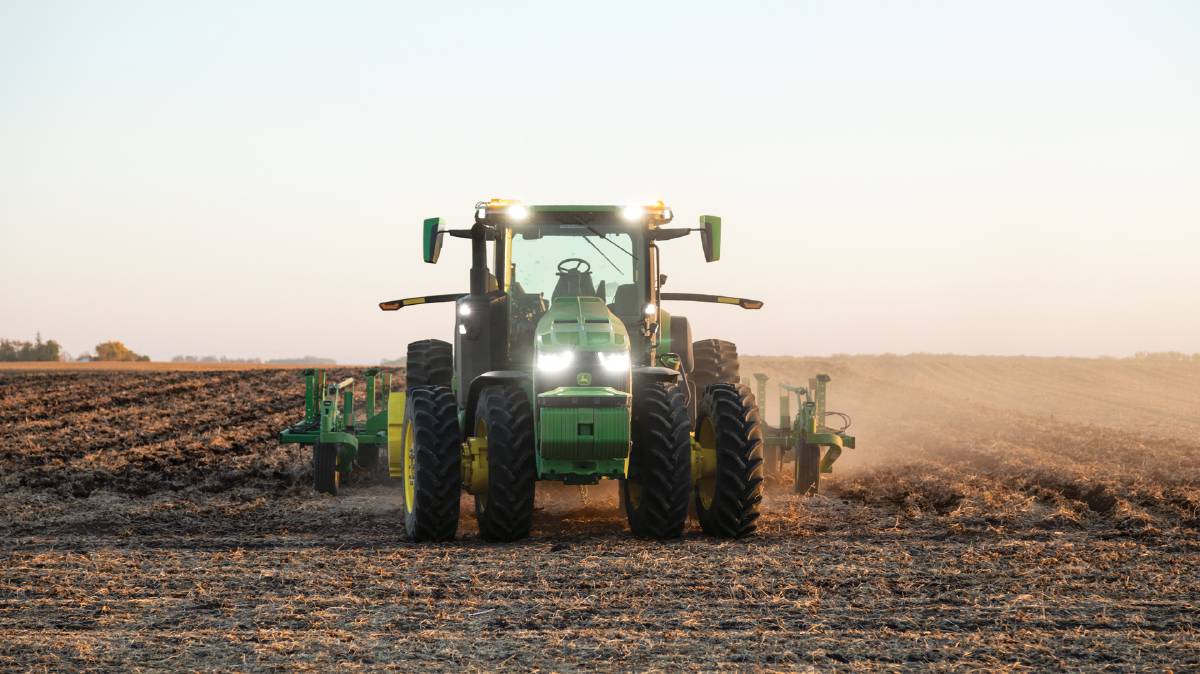 Day or night, it does not matter to the autonomous tractor, it will continue operating until the task is completed.

"This isn't a concept machine, this isn't a demo, this is a working machine that will be available later this year to farmers," Ms Kovar said.

"These machines don't get tired and they don't call in sick - they can run all day and, if needed, all night," she said.

"Autonomy is not a convenience on the farm, it is a necessity to get the job done today and into the future.

"Autonomously tractors can handle some of the work farmers don't have the time or labour to do."

Its See & Spray automatic herbicide application technology, which can distinguish between weeds and crop, was awarded under both the Robotics category and the Vehicle Intelligence & Transportation category of the annual CTA awards.