A Poll Merino stud reserve from Moorundie Park stud, Gulnare, with tremendous presence has lifted the benchmark for rams sold in SA so far this season selling for $60,000. 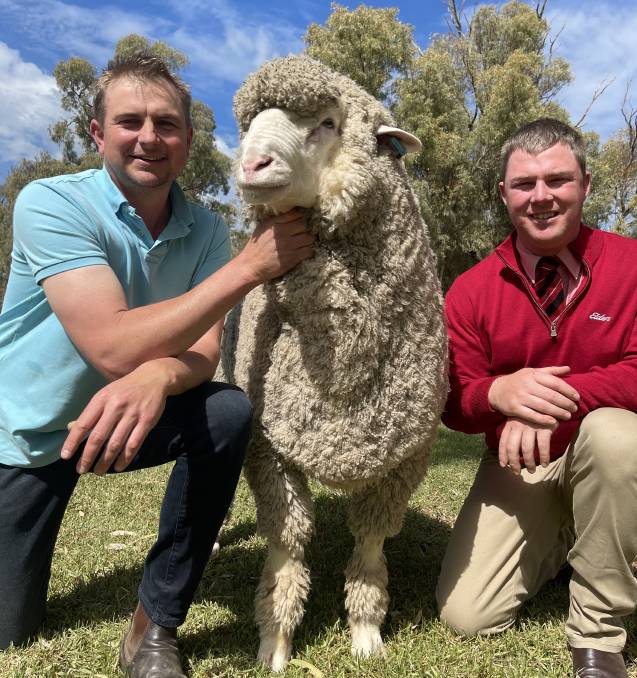 A Poll Merino stud reserve from Moorundie Park stud, Gulnare, with tremendous presence has lifted the benchmark for rams sold in SA so far this season.

Mr Davidson said the May 2020 drop Poll Merino was among their keeper mob but it drew strong interest at the recent Mid North inspection day and they decided to eventually accept an offer from the two studs.

Sealing the deal, which was facilitated by Elders stud stock's Alistair Keller, was the willingness of the buyers to allow Moorundie Park to use SP36 over some selected ewes prior to him leaving the property.

The 19.6 micron ram weighed 129 kilograms with his wool tests including a standard deviation of 2.9, coefficient of variation of 14.8 and comfort factor of 99.7 per cent.

He is pretty ideal for today's market and what most Merino breeders are wanting to breed. - Tom Davidson, Moorundie Park

"He has such a good constitution and great outlook with top shelf wool on him and he is very proud, he stands out to anyone that sees him," Mr Davidson said.

"He is pretty ideal for today's market and what most Merino breeders are wanting to breed."

Kamora Park will put their new sire out with a mob of ewes in November and also plans to use semen from the ram in an AI program with 100 of their best ewe hoggets.

Kamora Park stud principal Colin Boughen said they had used semen from the ram's grandsire, Seymour Park 111, for three years producing some top quality sheep and hoped SP36 would have a similar impact on their stud flock.

"He (111) bred early maturing, big sheep with big heads and big barrels, just the type of sheep that suit our country," he said.

"We trust Alistair's judgement, he knows what a good Merino is and he thought he was a good one, hopefully SP36 will produce sheep with good long carcases, early maturing sheep with medium wool."

Seymour Park stud principal Clinton Blight said they had been looking for a ram with a great balance of wool quality and carcase and MP S36 "fitted the bill".

"He is a very uncomplicated ram with beautiful, white wool and he has good figures with a 48(mm) eye muscle depth," he said.

Also piquing Mr Blight's interest was a chance to secure some of their stud's bloodlines back.

"This ram gives us a chance to get a bit of Moorundie Park blood while still having that connection with our sheep which should give even more predictability breeding him with our ewes."

He said it was quite challenging to find "very good sheep" so he didn't mind paying "good money" for one.

"At the end of the day when you have got a ram with the pedigree you want and the ram itself is right, they are normally cheap when they breed."