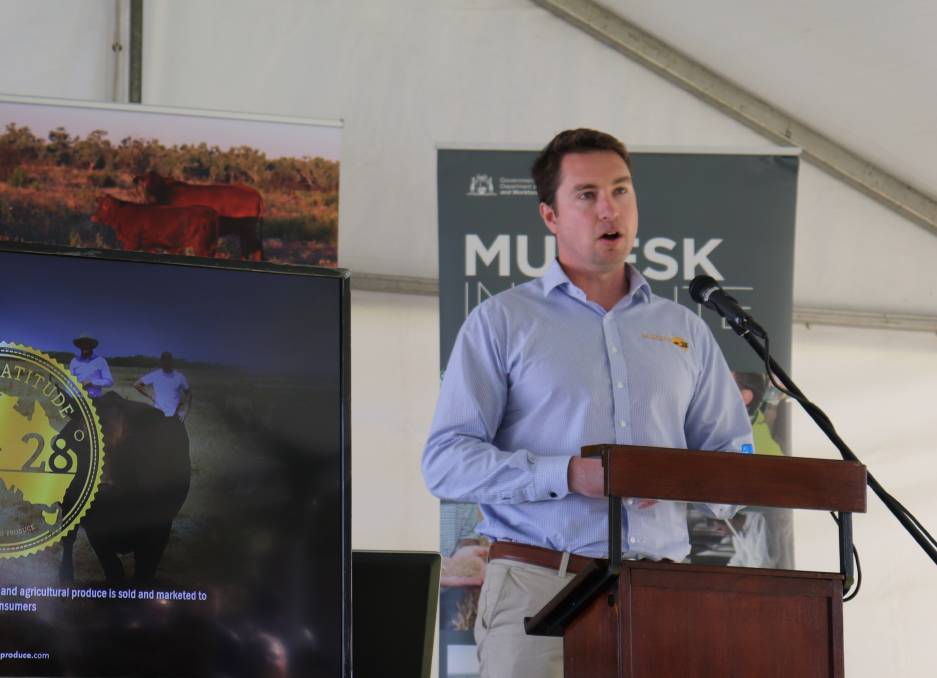 Building consumer confidence for Australian red meat in China through digital footprint technology, such as blockchain, could be the next big step forward in beef and lamb exports to Asia, according to James Williamson, managing director of beef and lamb exporter Latitude 28.

BUILDING consumer confidence for Australian red meat in China through digital footprint technology, such as blockchain, could be the next big step forward in beef and lamb exports to Asia, according to James Williamson, managing director of beef and lamb exporter Latitude 28.

Discussing his company's use of blockchain technology at the Muresk's Farm Smart Showcase last month, Mr Williamson outlined the benefits of creating a transparent and traceable red meat product to sell into the Asian consumer market, which is increasingly concerned about product authenticity.

He spoke about the evolution of his company's export business which, since it's entrance to the market three years ago, is focused on engaging effectively with Asian consumers of Australian red meat.

"Our involvement in the market has evolved from just being a regular commodity based export," Mr Williamson said.

"We always wanted to position ourselves as a direct to consumer exporter which essentially means we're the ones selling our product direct to the consumer and that puts us in a predominantly e-commerce space.

"We think it's the best way to operate within the international markets in China especially and we do also want to approach broader Asia to be able to engage directly with our consumer."

Mr Williamson made it clear that engaging directly with consumers in the Asian market may help alleviate consumer concerns about buying authentic Australian product.

Referring to examples of serious problems within the Chinese red meat sector, such as health concerns, false branding, products incorrectly marketed as Australian and so on, Mr Williamson said there was a gap in the market which could be addressed through technology.

"As a result of those issues, around 75 per cent of Chinese consumers are concerned about the quality of what they're eating and if it's going to be harmful to their health," he said.

"Another statistic I saw, though I'm not sure how the data was collected, said 50pc of what is sold as Australian beef in the Chinese market is in fact not from Australia.

"So if you put those concerns together, there's a gap in the market."

Noting that 90pc of Australian product needs to be further processed in China (repackaged into Chinese retail packs), Mr Williamson said there was a very large opportunity for switching out authentic Australian product, given the number of people who interact with the product in the supply chain.

"That's not to say everyone is doing it but quite often in the market there is product up there which is cheaper than we can get it in Australia, so it's very clearly not Australian," he said.

"At the moment, there is a premium in the Chinese market for Australian beef and lamb so if you can slap an Australian logo on your product, you've done well.

"Also, with the new brands appointed in China, not to say there's anything wrong with that, but it does mean there is a huge gap between the producer and the consumer.

"Where the gap is quite large is when the opportunity for counterfeiting occurs and that's where I think blockchain technology is an exciting concept."

Latitude 28 is utilising blockchain to bring traceability to their products, which plays a major role in their marketing.

"Our company is very much a forerunner within this tech space because we felt we really needed to create a point of difference in the market to survive in what is really an area that is dominated by big players," Mr Williamson said.

"We are a very small, niche player but the opportunity is there to combine the three attributes of what we're doing to create a unique proposition - traceable, interactable and engageable."

An obstacle at this stage is to drive consumer awareness around the power of blockchain.

"We still need to market the concept of blockchain because consumers aren't yet asking for blockchain verified product so we need to educate people on what it can do to provide confidence."

So what does blockchain do for the Latitude 28 business?

"Everyone along the supply chain - all of our participants down to a producer level - are scanning the livestock and then when it's a product they're scanning a QR code as it progresses through the chain," Mr Williamson said.

"That creates a geo-stamp of the location including the time and date which isn't controlled by us which means we can't create any 'fake' product.

"The consumer can scan the QR code and open information on of all the participants in the supply chain, meaning they can have a high level of confidence that this product has, in fact, come from Australia."

Cutting out concerns about product history and authenticity is an exciting prospect for Latitude 28, with Mr Williamson saying the company was looking at bringing a range of different technologies into the blockchain story.

"The naysayers would say you can't really remove the human element of packaging so we're looking at packaging technology to really secure it," he said.

"There are other technologies we can adopt which feed into it further, things like forensic microns that can then be read from a smartphone to highlight that packaging is correct.

"Taking DNA tests and samples could also create a huge amount of confidence.

"So there are lots of different technologies that could help in this space and blockchain is the technology to convey the message.

"So that's where I think the exciting story will come from blockchain."

Encouraging consumers to pull out their smartphones and interact with the company and their products is an essential part of the plan.

"Through blockchain we're interacting and dealing directly with our consumers which creates another level of confidence," Mr Williamson said.

"But all of that said and done, we also need to be engageable.

"For us, we're doing a lot of work with big data and data architecture, capturing information on transactions which occur in China to really understand our markets which has really further highlighted the need for blockchain technology.

"What that means is being very active in Chinese social media to drive our message and that's by no means an easy feat, but we are about humanising the brand and then connecting that brand back to the producer.

Latitude 28 continues to be active in the Chinese social media space, sharing videos and other content which has garnered a lot of interaction.

"It is an exciting proposition to be able to connect those consumers back to a farmer level," Mr Williamson said.

"And not just connect them, but really lean on the blockchain to really guarantee that it is happening.

"So our ultimate goal is to create the same level of confidence that would have occurred in the early 1900s when people bought their food directly from the farm.

"Globalisation has happened and therefore food is being spread across the world from all different countries.

"Then you've got the Asian food scandals and there is modern consumer distrust throughout Asia, which is where the opportunity is for us - we want 100pc trust between Chinese consumers and Aussie farmers.

"Throughout the world everyone is going down to farmer markets now, everyone wants to engage with a producer which is very difficult to do on a global scale and if consumers want to buy Australian products, obviously we have to create some digital faces to be able to put that together.

"So all said and done, that's what we hope to take our Australian product."